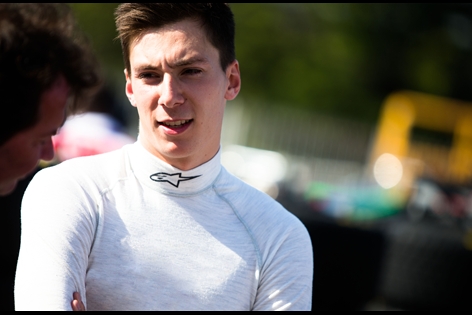 On January 28th 2015, Williams Martini Racing announced that GP3 champion Alex Lynn will join Susie Wolff as a test driver. Lynn will spend most of his time on the simulator, but is also scheduled to participate in the Barcelona mid-season test in May. The Essex born, 21-year-old adds another english face to the Grove, UK race team. Only he and Susie will wear helmets bearing a Union Jack from the FW37 cockpit.

“As a British team we are always on the lookout for emerging home-grown talent and Alex has caught our eye with his impressive performances in GP3.” Claire Williams said, adding, “He has been chosen on merit,” which implies he’s not bringing money to the team, but talent. That’s a good thing for two reasons. First, Williams is financially sound and not looking for sponsorship help from their drivers. Second, it’s not always the fastest that bring a sponsor, ahem, examples will go nameless.

Not at all a surprise, Lynn is excited at the opportunity, “I am extremely excited to be joining Williams, a team with such incredible history and amazing potential,” Lynn said. In addition to his test driver role, Lynn will compete in the GP2 championship with DAMS racing. And, if Lynn is fast and lucky enough, we’ll see a second British team/driver combination on the F1 grid in 2016. The most experienced active F1 driver, Jenson Button, is alone in that camp, driving for McLaren.

Fun with Cars wishes Alex Lynn the best of luck.