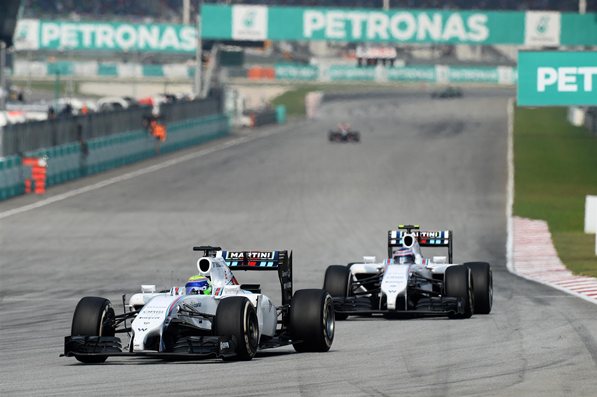 Felipe Massa did the right thing by disobeying his team. With less than ten laps to go Williams told Massa to get out of the way of teammate Vatteri Bottas because Bottas ran on fresher tires, lapped faster, and caught him. Fair enough. Furthermore, both Williams drivers caught the lead McLaren of Jenson Button, and Massa couldn’t find a way around. Williams figured give Bottas a chance.

Simple. Logical. Why not try it?

Well…Maybe Bottas could close on Button, execute a pass, and score more points for Williams. But if that’s the case, why not prove it by letting Bottas execute a pass on Massa and then go on to attack Button. In other words, no team orders. Let them race! Let the drivers make their own decisions and deal with the consequences. Williams decided not to do that. Instead they tightened the leash on Massa. Massa decided leashes are stupid and ignored them.

They raced, Massa came out on top. Williams saw both drivers finish in the points; a great result. So in my view: no harm, job done. But many folks lamented that Massa ignored his team and made a mistake. I disagree. Massa did the right thing for himself and showed the team his tenacity as a driver and how sensitive he is to any kind of team orders. Williams knew this when they signed him and hence should have known better.

Massa earned all the points he deserved, and accomplished something much more important. He showed Williams not to presume acquiescence from their lead driver. He showed Bottas to never think radioing the team will move him out of the way. Most importantly, Massa showed the F1 world his number two-driver status is truly dead and buried. For that I applaud him.

After all what is ideal? Eleven teams racing for the win, with one driver submissive to the other? Or twenty-two independent drivers all fighting to maximize their own results? Put it another way, I like racing. So, for goodness sake, kill the team orders and let them race.