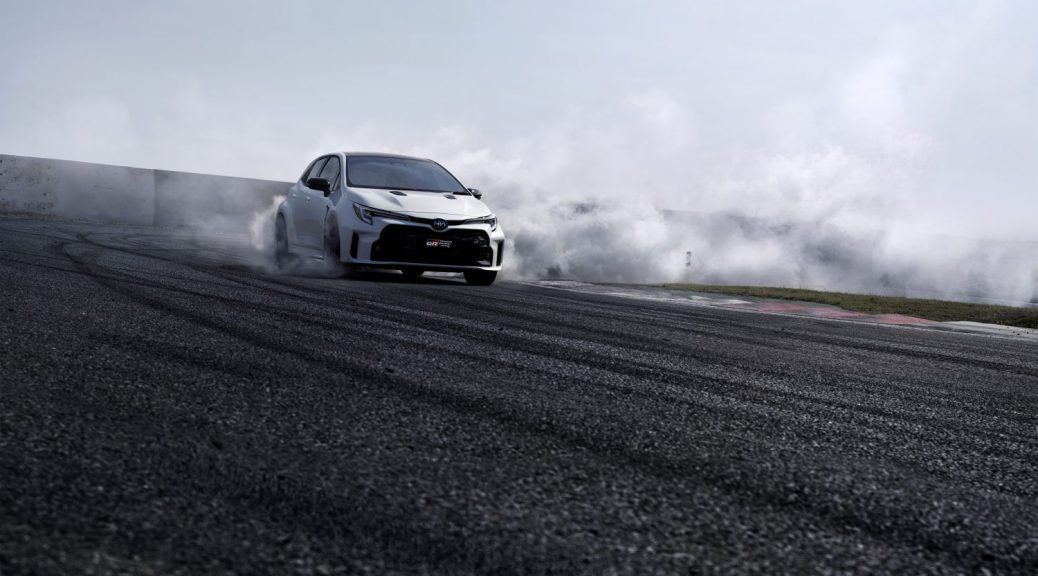 We’ve got a new, properly hot hatch coming to the U.S. courtesy of Toyota. The one and only transmission is a six-speed manual, you get more driven wheels than cylinders, and 300 horsepower!

You’re witnessing enthusiast history right now. The Corolla name is set to totally redeem itself in the eyes of the enthusiast crowd with the official announcement of the new 2023 GR Corolla. A rally-inspired, bombastic, bonkers, and brazen hot hatch from Toyota that aims to set the car loving crowd on its head. Small Toyotas this hot haven’t been with us since the All-Trac days, which were rally inspired Celicas from the 90s.

I say redeem because last year’s “big Corolla news” was that Toyota’s newest compact crossover SUV will be called Corolla Cross, which led many a car folk to worry the Corolla name was shifting to crossovers, giving into the gravitational pull of everything SUV.  Don’t get me wrong, it’s a good little Ute. But certainly not an enthusiast stand out.

But this monster is truly something. A five-door hatchback with a turbocharged 1.6-liter inline-three-cylinder engine pumping out 300 horsepower at 6500 rpm and 273 lb-ft of torque between 3000 and 5550 rpm. Already mega. Better still, that power gets channeled through a six-speed manual transmission and on to all-four-wheels. GR stands for Gazoo Racing, and this is their first wholly developed car for the North American Market. That combination puts the GR Corolla in super legit status.

The engine itself is called G16E-GTS. It’s rooted in the powerplant from the GT Yaris but got attention from powertrain engineers to boost output to the aforementioned figures. Fuel is delivered to both the port and directly into the cylinder. The turbo is a single-scroll, ball-bearing unit, which is integrated into the exhaust manifold. After spinning up the turbo, exhaust travels through a low back pressure three-piece muffler with brushed stainless-steel tips.

The body itself starts life as a GA-C platform but built with a significant increase in weld points and copious amounts of structural adhesive. The GR Corolla gets struts up front, quite common these days, and a multilink independent rear setup to mimic control arms in back. That configuration is less common and hugely important for improved wheel control. What actually contacts the road is a set of Michelin Pilot Sport 4 tires, sized 235/40R18.

Two trims of GR Corolla are slated to come: the Circuit Edition, which is a “launch year exclusive” version and Core. The Circuit Edition will get a roof of forged carbon sheet molding compound among a bunch of cool trim specific details to look insane in the best possible way. But all GR Corollas get aluminum hoods and door panels.  And the body in general is designed to provide real downforce to keep pace up in the corners.

Inside, the reality of cars today exposes itself. You get a fully digital instrument cluster display and center console touchscreen, for example. And Toyota Safety Sense 3.0 is standard on the car. Yes, even this turned-up-to-eleven hot hatch gets adaptive cruise control, lane-departure alert, steering assist, automatic high beams, and more.

But whatever! You also get a free 1-year membership to NASA (National Auto Sport Association) and a high-performance driving event with expect instruction. And you get what appears to be a truly driving enthusiast focused play thing. A car that makes 100 horsepower per cylinder and allows you to dictate power bias between the front and rear axle. Heck you can order one with Torsen limited-slip differentials for both the front and rear axles.

The Core grade is expected to arrive late this year, with the Circuit Edition coming in 2023. The potential for good here is through the roof. I’ll share once I learn more. And, of course, cannot wait to get the chance to tell you how it drives.