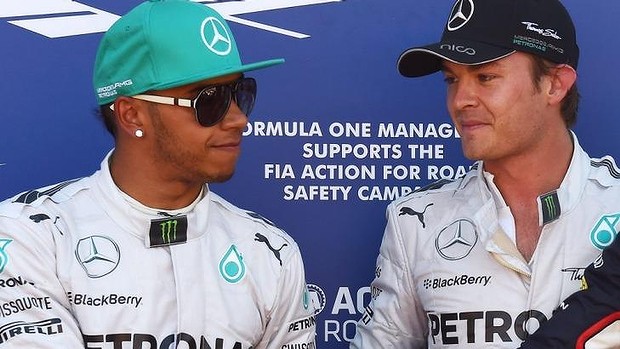 Since we saw Mercedes humble its competitors at the 2014 Formula 1 season opener in Australia, it seemed inevitable that the Drivers World Championship would eventually be contested between the Silver Arrows teammates: Lewis Hamilton and Nico Rosberg. At the United States Grand Prix on November 2nd, the only other driver with a shot, Daniel Riccardo, was mathematically eliminated and proved inevitability correct. With the Abu Dhabi Grand Prix finale fast approaching, it’s down to two drivers and 50 points. Hamilton holds a 17 point advantage, but Rosberg dominated last weekend and won the Brazilian Grand Prix, so he carries momentum. Who will win? Statistics say: Hamilton.

I devised this fun little chart outlining all the variations on results between Hamilton and Rosberg:

In three out of four of those cases, Hamilton wins.

Put it another way, if Hamilton finishes second or better, he becomes Drivers World Champion, regardless of how Rosberg finishes.

Almost all F1 fans agree that double points for the last race are silly…stupid…gimmicky—a mistake. But our best argument for reverting back to the 2013 points scoring system is that double points aren’t likely to change the outcome. Here’s a theoretical chart without double points, but all else equal:

In this case, Hamilton would have a slightly stronger statistical chance at the championship, but notice that the four likeliest scenarios I listed before remain the same.

So there you have it, the Fun with Cars nerdy version of championship math. And now for our prediction: Daniel Riccardo hops on his magic Kangaroo and boomerangs back in time several Grands Prix, wins them all, and the 2014 Formula 1 Drivers World Championship!

One thought on “Who will be F1 Drivers World Champion?”