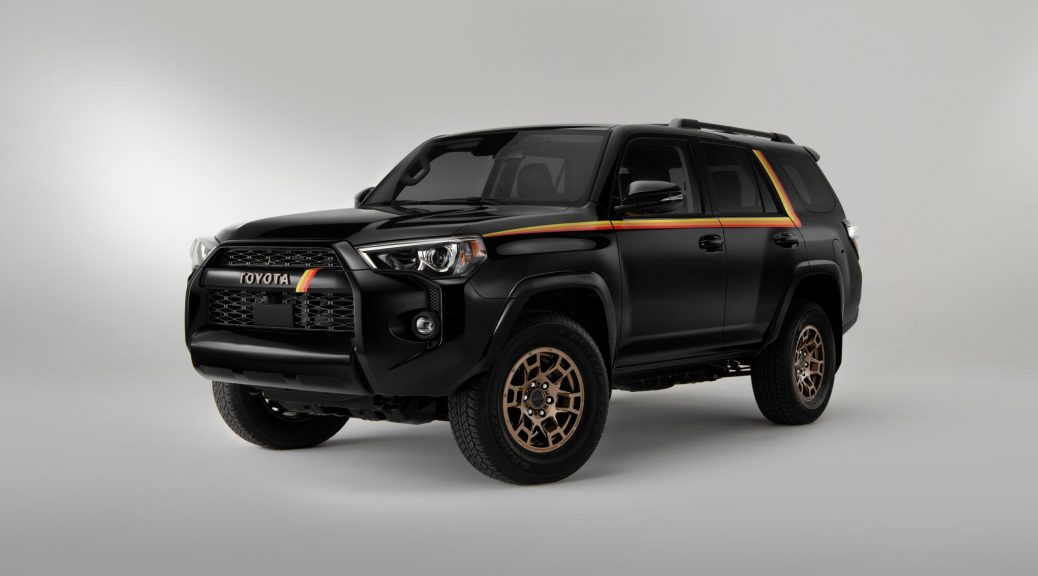 To celebrate, Toyota will build a limited-edition model called 4Runner 40th Anniversary Special Edition, which is logical enough. It stands out with bronze colored 17-inch wheels, some graphics, and a 40th Anniversary tailgate badge

Two things to report here: First, Toyota introduced the 4Runner to us for the 1983 model year. Second, 1983 was almost 40 years ago! Good gravy, that’s a tough pill to swallow. And further proof that, as time passes, the passage of time gets more stressful. The silver lining to such devastating news is the 4Runner 40th Anniversary Special Edition. A limited-edition, uniquely styled version of Toyota’s off-road-friendly Ute.

The 40th Anniversary 4Runner starts life as a SR5 Premium grade, though it is 4WD only, and gets dolled up from there, which puts it in right around the middle of the lineup. Speaking of, Toyota did not announce a price, but a 4WD equipped SR5 Performance with a moonroof goes for about $44,500. With that, I expect the 40th Anniversary 4Runner to cost under 50K, but not by much.

What will you get for the money? A bit of exclusivity to start. Toyota intends to limit production to 4040 units, as a nod to the anniversary. And will offer but three exterior colors: White, Midnight Black Metallic, and Barcelona Red Metallic. In addition to that, you’ll see bronze colored 17-inch wheels, a body-color-matching heritage grille, and an also bronze colored badge on the tailgate.

Toyota also has a heritage graphics package of yellow, orange, and red that streaks across the body from just above the headlights through the doors and then shoots upward toward the roof on the c-pillar.

Inside, Toyota adorned the 40th Anniversary 4Runner with a bronze-colored shift knob, seat stitching, and a few other bits here and there. You’ll step on 40th anniversary floor mats. And sit on 40th anniversary emblazoned SofTex seats. If you want to let in some natural light, a power moonroof comes standard, which is a $630 option on SR5 Premium.

But it’s largely the same body-on-frame, midsize sport utility it’s always been. Afterall, power still comes from a naturally aspirated 4.0-liter V6 that pumps out 270 horsepower and 278 lb-ft of torque; and then gets channel through a five-speed automatic transmission. These days, that’s old school. No 48-volt electrified gadgets. No advanced variable vane turbos. No eleven-teen gear transmission with barely above idle instate cruising speeds. Just old-fashioned displacement and grunt.

And that’s what is most satisfying about the 4Runner turning 40, in its life, it hasn’t changed much. It is still truck based and truck like; not as refined down the road as many modern SUVs, but with a two-speed transfer case and 9.6-inches of ground clearance, it doesn’t even need to travel down the road. I mean, yeah, It’s grown, in length—and width. But who among us 40 somethings haven’t gotten a little wider? The point is, the 4Runner has stayed focused on its mission and true to its purpose. And that’s why I am happy to celebrate its 40th birthday.