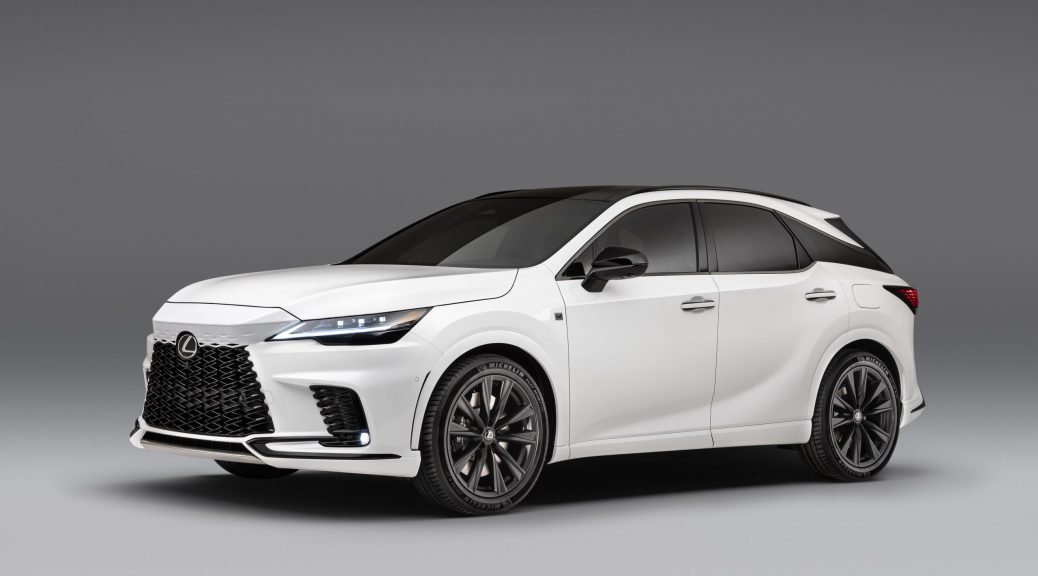 Three of the four powertrains will be electrified. None of them will include a V-6. Lexus also built the sportiness RX yet, the 500h F-Sport.

24 years after Lexus introduced the RX crossover SUV, which more or less invented the luxury crossover SUV segment, we now get the fifth-generation RX model for the 2023 model year. Actually, we get several: Front- and all-wheel-drive versions of the RX 350, and several electrified AWD models, the RX 350h, the RX 450h+, and a brand-new kind of thing: the RX 500H F Sport. And, unlike the original, V-6 equipped 1999 RX 300, none of them run on more than 4 cylinders.

Stylistically speaking, the fifth-generation RX takes a distinctive turn from the fourth, following, in concept at least, the new-for-2022, second-generation Lexus NX but then taking it a step further. The spindle design front-end we’ve seen on a lot of Lexus product has evolved to have the top be body-colored, sticking out like a shark nose that protrudes into the headlamps on either side. The lower part of the spindle makes up the grille and widens as it drops to the lower bumper. It’s certainly a look. And, I’ll add, an improvement over the last model.

In profile, you can see that Lexus extended the wheelbase by 60mm (2.36 inches), and reduced the rear overhang by the same amount, to give the RX a less bulbous, more stretched out and sleek look. The change in dimensions is thanks to riding on a new GA-K global platform. In addition to the new stance, Lexus claims the 5th gen RX is as much as 198 lbs. lighter than the outgoing model, depending on specifics. Furthermore, you roll-on either 19-inch for 21-inch wheels, the latter truly filling the wheel wells nicely.

Choosing between 350, 350h, 450h+, and 500 F Sport names also changes the powertrains underneath the hood, and indeed underneath the entire body. The base RX 350 gets power from a turbocharged 2.4-liter four-cylinder making a peak 275 horsepower and 317 lb-ft of torque. Paired with an eight-speed automatic transmission, front-wheel-drive versions need 7.5 seconds to reach 60 mph from rest, and, according to Lexus, traction gained from all-wheel-drive drops that to 7.2 seconds.

Every other powertrain is electrified. The 450h+ is a plug-in hybrid. But aside from announcing it as part of the RX line-up, the Toyota’s premium brand kept mum, instead saying we’ll learn more about it later. But don’t be surprised if it’s pretty similar to the NX 450h+.

The 350h does come now and gets a touch more displacement, loses a turbo, and gains electricity, when compared the 350. The 2.5-liter engine and electric motor combo delivers 246 horsepower and 233 lb-ft of torque, to all four wheels, but does so in such a way to maintain respectable acceleration, needing 7.4 second to reach 60 mph.

But then there’s the new trim in town, the 500h F Sport. A more sporting take on the hybrid idea. The turbocharged 2.4-liter returns and buddies up with electric motors to output a total of 367 horsepower and 406 lb-ft of torque. And it includes a trick Lexus calls Direct4 all-wheel-drive, which supplies “optimal torque levels” to the all-electric rear axle drive system. Neat.

500h F Sport also comes with its own look. You get a different grille and front bumper, to start. You also roll-on 21-inch wheels, not 19s. But, critically, inside those 21s, you’ll see six-piston fixed brake calipers ready to squeeze on the rotors. Six-pot calipers on a Lexus SUV, say whaaaat? That combines with other body cladding and aerodynamic tweaks to make the 500h F Sport stand out.

Inside, the RX gets plenty of new tech, the center piece being a 14-inch multimedia touchscreen, which debuted in the 2022 Toyota Tundra and also landed in the second-generation, 2022 Lexus NX. The system works well, and leaves plenty of screen space for easy-to-read use and features. It’s certainly an improvement from Lexus interfaces from several years ago. You also get touch-of-a-button door opening with a system Lexus calls e-Latch as well as multi-colored illumination accents. Optionally available items include a panoramic moonroof, head-up display, navigation, and more.

From a safety slash driver nannies point of view, the new RX gets the Lexus Safety System+ 3.0. It includes a battery of driver aides, including: Pre-Collision System (PCS) with Pedestrian Detection, Intersection Support and a new feature of Motorcycle Detection; All-Speed Dynamic Radar Cruise Control with new Curve Speed Management (DRCC); Lane Departure Alert with Steering Assist (LDA); and Emergency Driving Stop System (EDSS). And there will be optional system available on top of that, such as parallel parking assistance called Advanced Park.

Since 1999, the RX model catapulted Lexus to huge success and, to me, it looks like the fifth-generation model will continue that momentum, as there are several options to cater to a lot of potential buyers, be they fuel conscious, interested in attention, or just some peace and quiet. Expect the 2023 RX to reach dealers at the end of the year. And, as soon as I get the chance, I’ll be sure to tell you how it drives.