For anyone even remotely interested in motorsport the Festival of Speed is a MUST. Where else would you get to see F1 stars of past and present roaring round the Goodwood Hill Climb track in some of the sport’s most iconic cars? Throw in some jaw dropping supercars, superbikes, thought provoking concept cars, stunt bikes, the Moving Motorshow, a challenging rally stage, the Red Arrows display team and the Le Mans 24-hour winning Audi E-tron Quattro and it’s bound to be a weekend to remember. 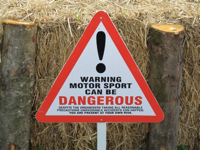 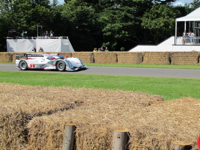 Who needs Armco barriers when you have hay bales?

The Festival of Speed took place the weekend before the British Grand Prix on the Goodwood Estate in the heart of the English countryside, southwest (ish) of London. Over the course of the weekend around 185 000 motorsport fans of all ages joined Lord March and his invited guests and enjoyed a petrol fuelled feast for the senses. The Hill Climb participants list read like a Who’s Who of motorsport from current stars including Hamilton, Button, Vettel, Webber, Rosberg and Senna to legends of F1 past including Fittipaldi, Cheever (one for the US contingent), Bell, Moss, Stewart and Surtees. Incredible. 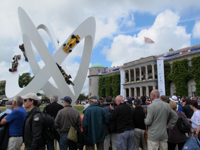 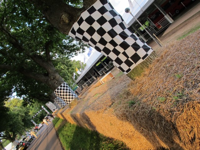 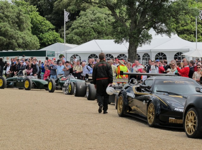 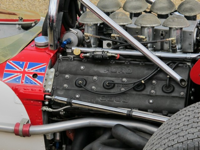 Goodwood at its best

Craig “The Kilt” Wilson (CKW) and Co. descended on Goodwood this year keen to soak up the atmosphere and spread the F1 Show word. An F1 Show/Hornette camp was created and everyone was raring to go on Friday morning. The weather brought more summer showers than summer sun, making wellies and raincoats a necessity. The wet weather did little to dampen the spirits, though, and upon emerging from the entry bridge into a throng of excited petrol heads, it was 360 degrees cars. The FoS really is a candy store for motorsport enthusiasts. What to do first? Catch a glimpse of the majestic Bugatti Veyron on the track? Dash over to the F1 paddock to see the iconic and goose bump inducing McLaren MP4-2C? Chill out on a giant beanbag on the veranda of the Red Bull Energy Station watching F1 stars of the future battling it out on the Red Bull Gridsters simulators? Watch interviews on the RAC (Royal Auto Club) stage (F1 insight from Damon Hill and Karun Chandock to name a couple)? Just as well we had three days to cram everything in! 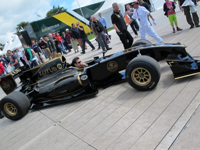 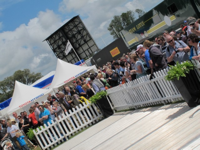 The great thing about the FoS is just how close you can get to the cars and the stars. Health and safety is not an issue. To the delight of the spectators F1 cars were rolled through the parting crowds while on track the biggest cheers were reserved for the drivers who made as much noise as possible. Donuts and burn outs a plenty. Awesome. The Hill Climb drivers spent time signing and posing for photos with fans. Some were more obliging than others. Sebastian Vettel showed his sensitive side by offering to sign a little girl’s cap. She took offence and started screaming. Oops. Obviously a Mark Webber fan. It’s not just about seeing the cars, imagine the thrill of hearing two RB7 engines ‘playing’ God Save the Queen in unison, a real spine-tingling moment. Why did they not pitch this for the Queen’s Jubilee concert? It was much more entertaining than Cliff Richard in a pink suit.

CKW did the F1 Show proud. Not sure whether asking a group of Jackie Stewart ‘look a likes’ (who were rockin’ the tartan trousers and side burns) whether they were F1 fans (!?) was his proudest moment but he was on form as usual. We had lilac pom pom twirling in the Christian Horner/ Sebastian Vettel interview, a photo opportunity with the Wacky Racers themselves (pretty sure it was Lewis Hamilton in that Mutley costume), and F1 Show plugging a plenty – the F1 Show cards are now in the possession of Tiff Needell, Louise Goodman, Karun Chandhock and Daniel Ricciardo.

The theme of this year’s event was Young Guns- Born to Win, so did we pick up any insight from the 2012 F1 Championship contenders during their Q&A sessions? 2011 Drivers’ Champion Sebastian Vettel offered profound insight into his Valencia DNF- ‘Sh**t happens’ – words of wisdom indeed. Red Bull racing Team Principal Christian Horner announced ‘I’m fit, I’ve been training and I’m ready for this [Hill Climb in the Infiniti M35H] moment’. Won’t disagree with you there Christian. Toro Rosso’s Daniel Ricciardo (the smiliest man in F1, for sure) was charmingly diplomatic describing Fernando Alonso as ‘a bit of a bull’ and Maldonado as err ‘one of the difficult ones’. Mark Webber remained tight-lipped about a possible team move saying only that he and Jenson had recently been ‘talking about driver movements’. Hmm. Think that probably adds more fuel to the fire, Mark. [Editor’s note – since this was written we now know that Mark Webber signed with Red Bull for 2013 – RW] 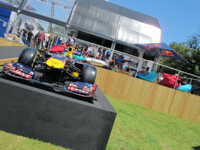 The star spotting didn’t stop as the gates closed for the day. Those eager to catch a glimpse of their favorite motorsport stars suited and booted were in for a treat as the stars of past and present arrived for the famous Goodwood ball. Several posed for photos and autographs. Jesse James, of West Coast Choppers fame, arrived in a Skoda estate car (liking his ‘style’), while Ron Dennis did a drive by in a stunning gleaming black McLaren 12C. Best car had to go however to the McLaren test driver Oliver Turvey who rolled up in a sparkling burnt orange (not quite rocket red) McLaren F1 GT. Astoundingly gorgeous. The car that is, not the ‘mini me’ Jenson…. sorry… Oliver. Best dressed had to go to Nick Heidfeld looking sharp in a smart black tuxedo. Most amusing moment was Adrian Newey arriving with his bowtie in his pocket, a genius with pencil and ruler, but not so good with silk ties. There is hope for us all yet. 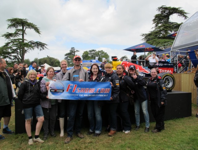 From tartan trousers to tailored tuxedos….. and the odd F1 Show T shirt

For those wanting to take a piece of motoring history home with them there was a vast array of stalls selling motorsport memorabilia. CKW tried in vain to squeeze himself into a Takuma Sato race suit. A shame it was a tad too small. Name it and you could buy it. Bits of F1 cars, motorsport themed prints, vintage grand prix posters, team clothing, model-car kits, and those with a bit more cash could bid on a selection of vintage cars up for auction. When I say a bit of cash, I mean A WHOLE LOT of cash. The ex-Sir Henry ‘Tim’ Birkin 1929-32 Bentley 4½-Litre supercharged single-seater – the car that set the Brooklands Outer Circuit Lap Record at more than 137mph in 1931, went for a mere £5 million (yes, million) a world record for not only a Bentley, but also a British car being sold at auction. WOW.

So there we have it, an absolutely fabulous weekend. The Goodwood FoS is always glorious despite the weather. No matter how many times you have seen the cars you used to watch racing as a child, it is always special. A magical experience indeed. Roll on July 2013.