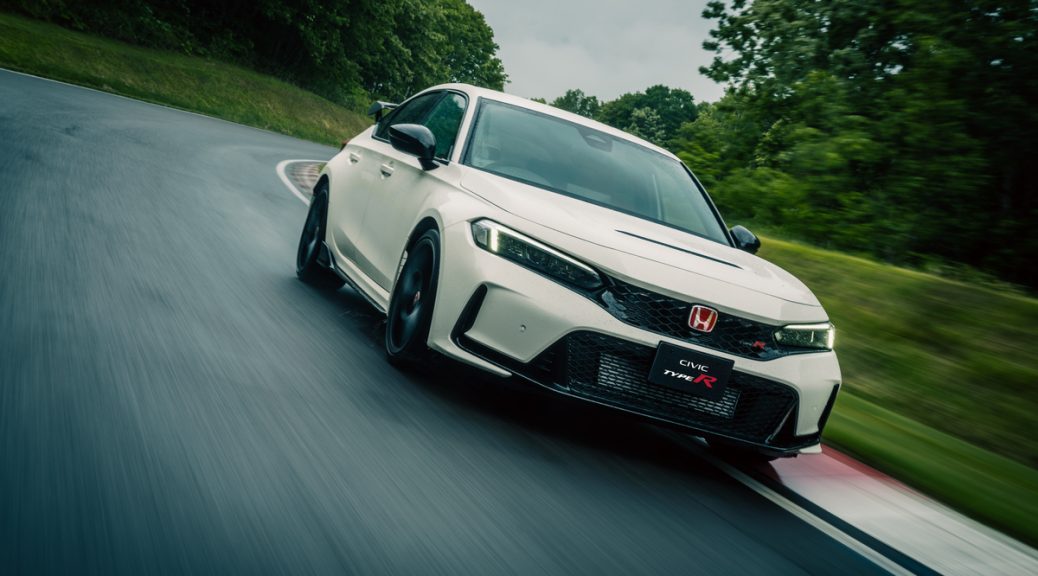 Much more attractive than the outgoing model, Honda also promises more power and a very snug and comfortable interior.

At first turn of the wheel, you knew the 11th generation Honda Civic hatchback took a big step forward in driver engagement and feel. Its stiffer platform allowed the suspension to precisely control the wheel and simultaneously provide the driver good feedback. Honda built a great car in the 2022 Civic hatchback. And, critically, provided an excellent foundation for the 2023 Civic Type R.

Now Honda gave us our first glimpse of what the 2023 Type R will look like. And, phew, it looks good!

Afterall, when Honda first brought the Type R to the United States in 2017, riding on the 10th generation Civic platform, it was mechanically mega. A turbocharged 2.0-liter and slick shifting six-speed manual transmission delivered 306 horsepower and 295 lb-ft of torque to the front-wheels. And, almost magically, did so with virtually zero torque steer. Moreover, you sat in deeply bolstered bucket seats and held a nice and thick steering wheel rim.

But styling? Well, let’s call it polarizing. Lots of sharp and contrasting angles scraped across the car to give the Type R a busy appearance. You could argue the front was full of purpose, which gave it a sense of seriousness and speed. And that was beautiful in its own right; same for the car in profile. The rear, however, was busy to a near confusing degree.

No more. For the 2nd generation Type R to reach U.S. soil, we get a meaner and cleaner look that is much easier on the eyes. Longer, lower, and wider, according to Honda, the Type R finally looks fully baked and fully developed.

The biggest improvement is in the back, of course, and it starts with large black rear wing mounted via black brackets to separate it several inches from the hatchback. Doing so not only gives it a commanding presence but likely increases its capacity to generate downforce. Down at the bottom, you get a bit of rear diffuser nestled between what is quickly becoming the Type R’s signature three center mounted exhaust tips. Gone are all the extra flaps and scoops and inlets and angles and hoopla. It’s sexy.

As we head to the front, you see integrated rear fender flares that blend into the rear doors, which are unique to the Type R. A character line runs from the taillights, just above the door handles and stops just above the headlights, which adorn the Type R on either side of a mesh grille. Down low, you easily spot a massive water-to-air intercooler and smaller air inlets on the sides, likely there to feed cooling air to the front brakes.

For 2023, Honda will offer the Type R in five colors: Rallye Red, Boost Blue, Crystal Black Pearl and Sonic Grey Pearl. But that’s four colors you say. Well, that’s because the only color I consider legit is the Type R mainstay: Championship White. Overall, in the 2023 Type R, you see a cohesive shape and design that looks comfortable in its own skin. And devastatingly quick.

How quick? Hard to say. Honda kept mum on many details. But the Japanese brand did say the new car will get an “An even more powerful and responsive version of Honda’s award-winning turbocharged 2.0-liter engine.” I guess that means at least 315 horsepower and 300 lb-ft of torque. Bearing in mind that the Type R will remain front wheel drive, I don’t expect any blockbuster figures. And frankly, I don’t want to hear them either because the 10th generation Type R delivered a fantastic performance balance that I’d hate to see shift much.

Other nuggets of news include “lightweight” wheels, which I bet means forged. In the images, we see Michelin Pilot Sport 4S tires, but I am hoping that an options package, or special edition is in the works with Pilot Sport Cup tires is in the works.

Inside, we get new visuals via a fully digital instrument cluster screen and new center console touchscreen. And the cluster will provide you different screens for the different drive modes, which all sounds lovely. And, some sort of faux suede material will wrap around the new, but still heavily bolstered seats to help you feel snug in place, regardless of lateral g.

Honda says we’ll learn more details and price as we approach its fall launch. But, much more importantly, I can’t wait to learn— and share—how it drives.