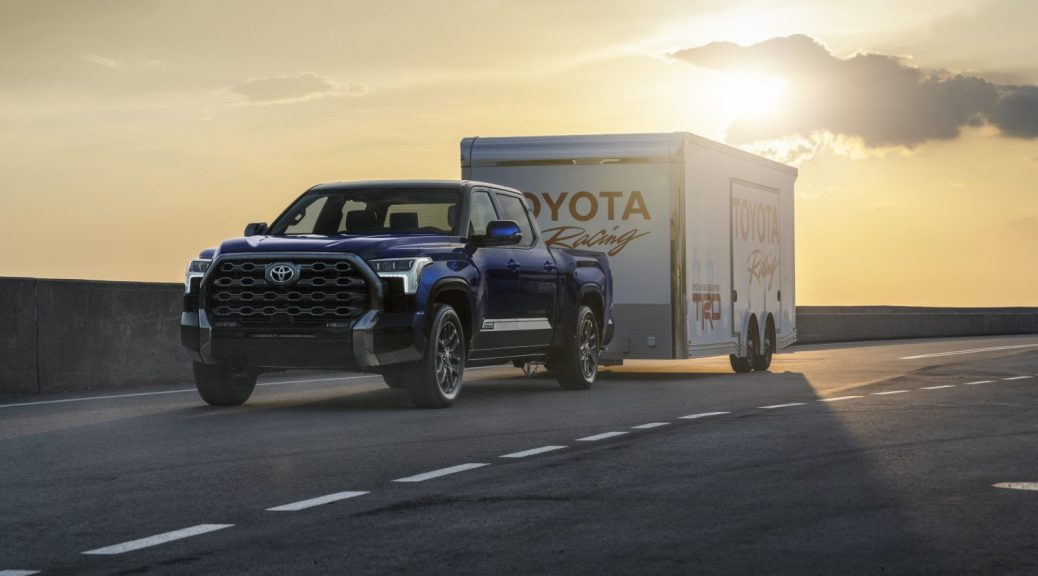 Starting its third generation, it gets new tech, a new frame and body, and two V-6 engines to choose from.

Toyota’s full-size Tundra truck enters its third generation for 2022 with a new, big ole, in-your-face front grille with LED headlights and a whole lot of goodies. It’s built on an all-new, fully boxed frame and high-strength steel cab, however both the hood and front door panels are made from aluminum.

Jumping on the alternative bed material bandwagon, the new Tundra has a sheet molded compound (SMC) or plastic bed with aluminum cross member providing re-enforcement underneath. Toyota says this bed offers better dent, ding, and rust protection. To access the bed, you can open the tailgate with the key fob.

Speaking of, three bed lengths are available: 5.5-, 6.5-, and 8.1-feet long. The longer two are available with a Double Cab body and the shorter two are available on the CrewMax body. That’s right, all Tundra’s are four-door trucks now. Don’t worry, there are still plenty of options. Toyota will offer six trims: SR, SR5, Limited, Platinum, and 1794 as well as the off-road friendly TRD Pro.

Under the hood lies a twin-turbocharged 3.5-liter V-6 (precisely 3445 cc) that produces 389 horsepower and 479 lb-ft of torque. That’s the base engine. If you want more power, the option is to get the exact same engine with an electric motor nestled in the bellhousing, providing enough grunt to increase peak outputs to 437 horsepower and 583 lb-ft of torque, respectively. No V-8? No V-8. Sad face.

Either motor sends its power through a 10-speed automatic transmission and then on to either the rear wheels or part-time four-wheel-drive system. If you get a 4×4 Tundra, the rear differential will be electronically locking. Combine the powertrain and frame and Toyota says the Tundra can tow as much as 12,000 lbs. and carry up to a 1940 lb. payload.

Holding up said payload or trailer is a new, multilink (but still rigid axle) rear suspension that swaps out leaf springs for coil springs mounted outside of the frame rails, for improved suspension performance. Moreover, there is an optional load-leveling air-suspension in back that also offers a lower ride height for convenient passenger entry or higher ride height for better clearance while off-road. Toyota will also offer an adaptive shock absorber system.

In addition to the aforementioned suspension tech, Toyota gave the Tundra a Tow/Haul driving mode and a system called Trailer Garage, which will measure and save your trailer specs and do a variety of things, including providing steering assistance while backing up to hook up your trailer. Several cameras give visual aids as well.

Inside, depending on grade selected you have either an eight-inch or 14-inch center console touchscreen to use. With it you can wireless hook-up to Apple CarPlay or Android Auto, have a great look at all those trailer cameras, or play around with the usual battery of “infotainment” features. But we’re not done with screens as the instrument cluster either has a 4.1-inch screen between two real gauges in lower trims or a 12.3-inch fully digital cluster on higher trims.

For the off-road crowd, Toyota will install a number of features on multiple levels of trucks, including a multi-terrain monitor, which gives you view of several strategically mounted cameras around the truck alongside data to show critical truck stats to help stay on track. Or go full boogie and get the TRD Pro with Fox Shocks and a bunch of proper kit.

All Tundra’s will have Toyota Safety Sense 2.5, which includes things like, pre-collision system with pedestrian protection, adaptive cruise control, and lane-departure alert.

And all Toyota Tundra’s will cost money. We just don’t know how much yet. But we should learn more as we get closer to the on-sale date, later this year. Based on the latest specs, this new Tundra will be a serious contender. The question is, will that translate to sales in this very brand loyal market.