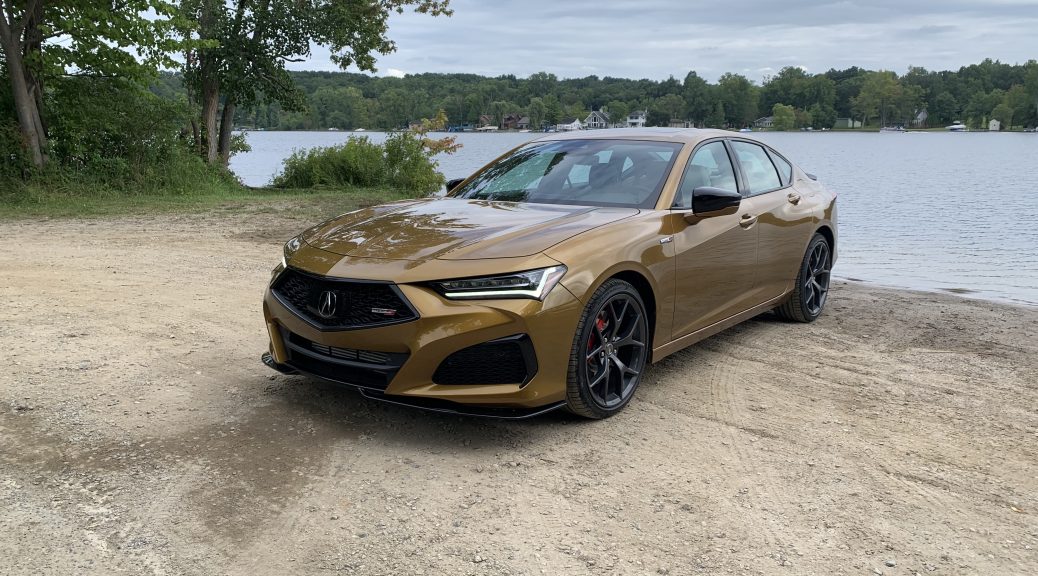 The Type S stands out from the standard TLX with motor, structure, and more

What makes a proper sport sedan? You need good amounts of power, of course, a well-built and sport tuned chassis certainly helps, as do strong brakes, grippy tires, and supportive seats. But while all the above are important ingredients, the real key is blending them together just so to provide an easy-to-drive, engaging dish. And after a few bites, I’m pleased to say the 2021 Acura TLX Type S is delicious.

Let’s look at the ingredients.

To start, Acura pulled the turbocharged 2.0-liter four-cylinder from the standard, non-S TLX and swapped in a turbocharged 3.0-liter V6. This thing is serious. Six-bolt main caps, forged crankshaft and connecting rods, and square 3.39-in (86mm) bore and stroke. The 60-degree V6 gets direct injection, cylinder de-activation, and active exhaust. All told, adding a liter of displacement and two cylinders pumps out an additional 83 horsepower and 74 lb-ft of torque, delivering 355 hp at 5500 rpm and 354 lb-ft between 1400-5000 rpm.

At first glance, the rest of the powertrain appears carryover from the non-S, using the same 10-speed transmission, and Super Handling all-wheel-drive (SH-AWD) system. But the details reveal differences. While the gearbox has the same number of speeds, and ratios, Acura installed a stronger torque converter, clutches, and indeed stronger gears themselves. Furthermore, when using the paddles to downshift in the Type S, they occur 40 percent faster. And if you’re in the Sport + driving mode, it will upshift 30 percent faster, too.

Once passing through the transmission, power channels through the SH-AWD system before reaching the wheels. The same system is optional on the non-S TLX, but standard here. Seeing how it can drive 70 percent of torque to the rear axle and from there deliver all of it to the outside wheel, that’s a good thing. Moreover, in Sport + mode, SH-AWD will work to deliver torque to the rear axle much more aggressively, by 40 percent, Acura says. All told, the first Type S from Acura in over a decade can hit 60 mph from rest in “about” five seconds.

While I applaud all those changes, how Acura strengthened the Type S structure is even more important. In addition to a few “internal frame stiffeners,” Acura installed a beefy shock tower brace up front and an A-brace in between the rear seat back and trunk. As a result, the Type S is 13 percent stiffer than the non-S model.

Doing that allowed Acura to drastically increase spring and shock absorber stiffness, without punishing its occupants. You get a 40 percent higher front spring rate, stiffer anti-roll bars on both the front and rear axles, and re-tuned adaptive shock absorbers to provide more damping force on all four corners. Surprisingly, the rear springs stay the same, as does the suspension geometry on both axles (control-arms in front, multi-link in back) but the changes above drastically effect the feel of the car.

And you can go further still. Acura offers a “High Performance wheel and tire package”, which my test car had. Selecting the $800 option replaces your 20-inch wheels with a Y-spoke wheel and Pirelli P-Zero summer rubber that not only provide more grip but weigh 21 fewer lbs. And that’s un-sprung weight. Those Y-spokes also give you a nice view of the 14.3-inch brake discs up front, which are 1.3-inches bigger than non-S TLX, and Brembo four-piston calipers clamping down on them.

Inside, you get the usual assortment of luxury features: heated and ventilated seats, dual-zone climate control, and plenty of ways to plug in devices. Infotainment duties come courtesy of a 10.2-inch center console screen up high and a “True Touchpad” absolute positioning control down low to operate things like the navigation system and 17-speaker sound system.

To control the car itself, you get a flat-bottom steering wheel with a nice thick rim, as well as paddle shifters to select which of the 10-speeds you wish at the moment, or feel free to just let the Acura decide. It’s experienced and pretty darn good at it.

While on the move, you sit in supportive seats with reasonably deep lower and properly deep upper bolsters. Your body touches leather upholstery and synthetic suede, as Acura installed inserts of the material to run up the middle of the seats.

Those bolsters will come in handy if you find yourself traveling on a twisty bit of tarmac. And if that is the case, consider dialing over to the sport + drive mode. Of the five modes available (comfort, normal, sport, sport +, and Individual) sport+ properly stiffens up the shocks, gives you the race car quick shifts, and decreases steering assist for weighty and precise adjustments. In sport +, the Type S comes alive. Especially if you optioned for the performance wheels and tires.

Seriously, pick your favorite canyon road and the Type S is legitimately athletic. Sharp steering, agile left-right transitions, and an all-wheel-drive system that allows you get greedy with your right foot. Again, it’s not the ingredients that impress, it’s the recipe. Acura tuned the Type S such that all the systems feels balanced and in harmony. No one attribute overpowers another, everything plays nice.

And that results in not just reasonably high performance, but easy to approach limits. As you brake into a corner, the nose quickly settles and gives you a strong front-end to play with. When it’s time to turn-in, the heavy wheel provides some feel and takes very little lock to get the Type S pointed. It will understeer, if you push, but a bit of left-foot braking will tuck the front back-in, chassis balance is sport sedan respectable.

Once you reach corner exit, go ahead and bury your right foot. The SH-AWD system distributes most of the 355 horsepower to the rear axle and will even overdrive the outside wheel a touch to keep the car rotated. As you unwind the wheel, feel good pull as shifts bang off with no perceptible interruption in forward motion. You can either quickly accelerate to the next corner or wind the thing out and bump against the 155-mph governor.

It’s a great motor, the exhaust tune is throaty, with an itty-bitty flywheel for a free revving feel. But that’s actually one of the few bummers of the Type S. Such a great engine should rev past 6200 rpm, but Acura shuts down the party. That’s low, even for a turbo motor. Thankfully, because you have a wide ratio range and quick shifts from the 10-speed, it’s far from a deal breaker. But every enthusiast I’ve met loves high rpms. And Acura is pretty darn famous for them, so it’s a shame.

What isn’t a shame, rather an incredible feat, is that Acura made an inherently nose heavy car feel so good to drive. The TLX is a front-wheel-drive based sedan, which means the engine is transversely mounted or laid out side-to-side. As a result, 59 percent of the weight rests on the front axle. Yet, the Type S feels very close to a rear-wheel-drive based sports sedan. You cannot say the same for the AWD non-S TLX. I tip my hat to the engineers.

There’s nothing special about a bit of beef, a few peppers, onion, and a bit of flat bread. But put them together just right and you have tasty tacos. After driving the TLX Type S in anger, it’s clear Acura found its cookbook. This is one scrumptious dish.