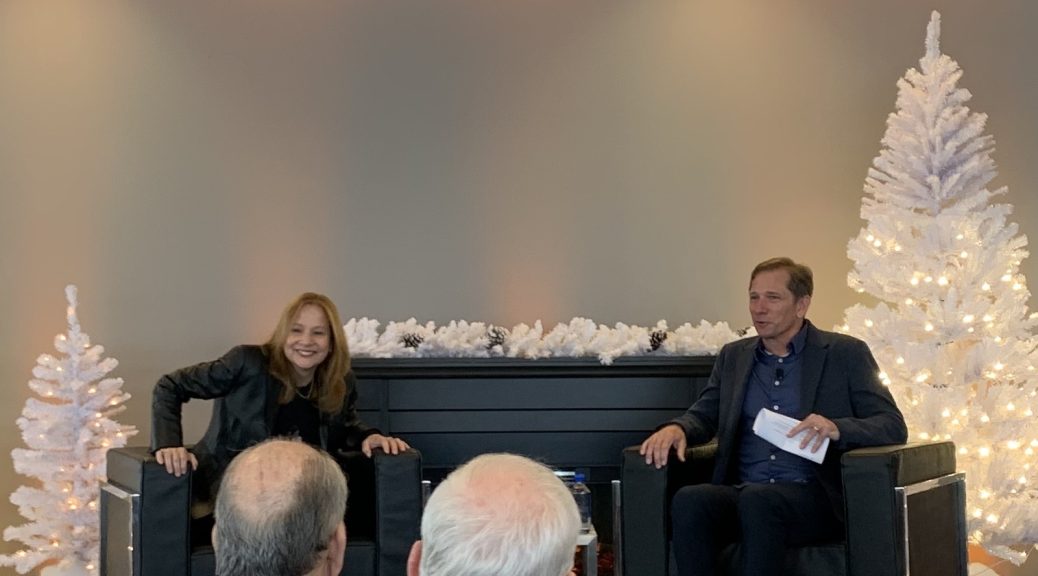 One the left, General Motors CEO, Mary Barra, with Jamie Butters of Automotive News on the right.

I asked GM CEO, Mary Barra, about how customers will embrace this new GM EV reality at a Detroit APA event.

Early in 2021, Mary Barra explained that GM is committed to only selling zero-tailpipe-emission vehicles by 2035 for all of its light duty models. That, effectively, means only selling battery electric power by that time. Though, theoretically, fuel-cell and some yet to be discovered biofuel could also meet that target.

Speaking of, GM is partnering with Honda on Fuel-Cells and co-developing EVs too: Honda Prologue

And, indeed, GM is well on its way. We already have the GMC Hummer EV, the soon to arrive Cadillac Lyric, as well as the coming Chevrolet Silverado, Blazer, and Equinox EVs. That’s, of course, just the beginning. The company also committed to selling one million EVs by the end of 2025.

But, ultimately, all of it is irrelevant if no one wants to buy them. Inherently, people resist change. And the automotive industry is fundamentally changing—fast. In that vein, the key isn’t to have enough EV product, but to have EV product that people want. Or, more specifically, that people aren’t scared of because of their differences to internal combustion engine cars. Here’s where the conundrum lies.

When I asked General Motors CEO, Mary Barra, about overcoming the resistance to EVs, especially in the light-truck space, she responded, “The demand for the products we have right now is super strong. I think it’s going to feed on itself because we have early adopters.”

“Silverado EV,” Barra continued, “the first model year (2024) is sold out. And there’s strong interest in the first limited edition of the (GMC) Sierra, so we’re seeing that strong demand. For a product like the Blazer or the Equinox, it’s a different customer, we didn’t do pre-sales, but we have a lot of hand raisers that are interested. And people are going online and ordering because these vehicles will be out next year.”

But is that a true indication of demand? Or rather a sizable, but ultimately fleeting, crowd of early adopters that will likely not add up to one million vehicles by the end of 2025.

Barra did go on to say, “we’re seeing strong demand and I think once they get out, because the big ah-ha about an EV is that once you drive one, you understand how much fun it is to drive. Instant torque, low center of gravity, the performance is just incredible. So, I think people are going to get more exposure and say ‘this is a great vehicle, I’m not giving something up to drive electric. I’m getting something.’”

“And that’s one of the reasons that we’re working on charging,” Barra continued. “Because you want to make sure you’re providing a product for someone that’s as reliable as their internal combustion engine vehicle. For the person who only owns one vehicle and depends on it for their livelihood.”

“They’ve got to have charging,” Barra concluded. “And that’s why we’re investing and working with a lot of partners as well as, obviously, provided a lot of input for the bi-partisan Infrastructure Bill to make sure that money is deployed to get the charging infrastructure that’s going to be robust.”

And that, perhaps, is the real question. Can the majority realize the benefits of EVs and change their collective minds quickly enough? And will that same majority tolerate the near-term, and potentially mid-term, inconveniences until charging infrastructure catches up.

Objectively speaking, EVs have a lot of strengths. But it’s still a big bet that folks will realize them as quickly as GM is asking them to. Then again, it may not matter. As climate change becomes ever more urgent, governments may simply mandate them. Who knows?

Regardless, a company is always better off if customers actually want to buy its products.

You can learn more about GM’s commitments here: Electric Vehicles

And for more analysis on the subject, check out this story by Your Test Driver